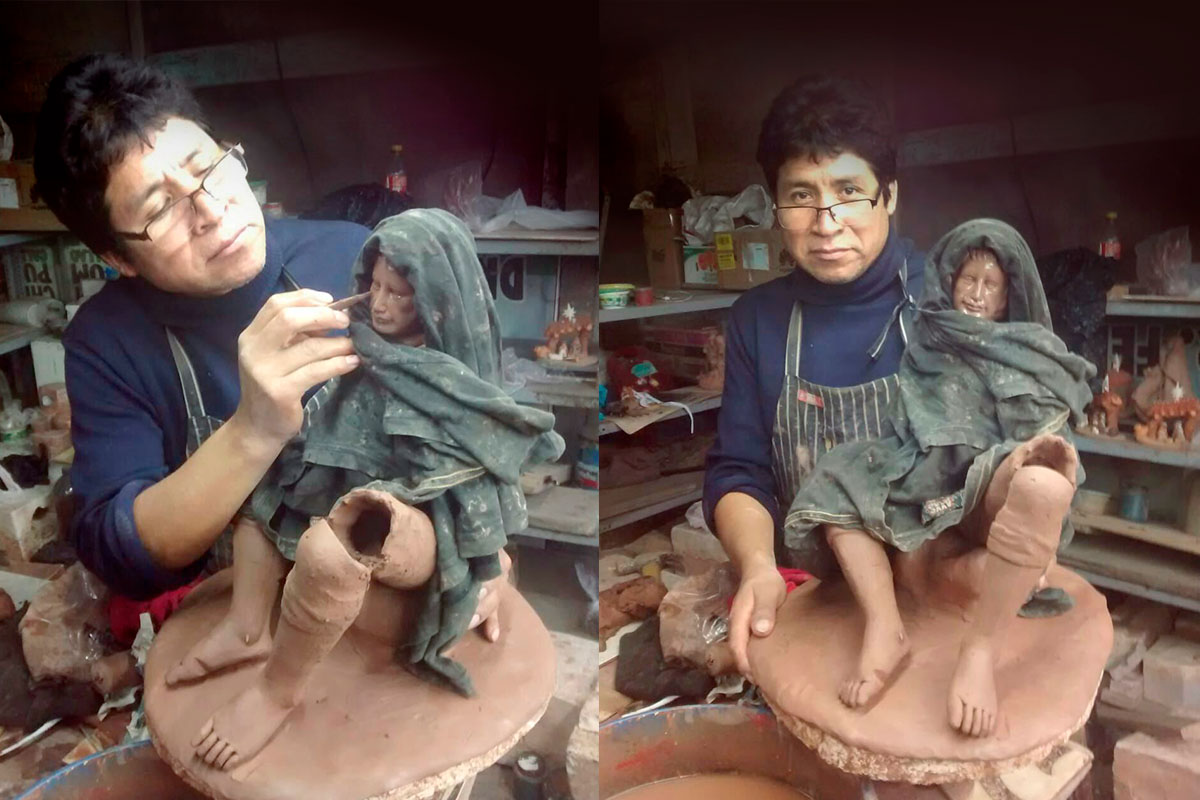 
Born on a ranch in Callao, Peru, Richard acquired his love for ceramics thanks to his older brother, Victor. In 1995, the duo entered their first contest with a Nativity and won first prize. After their victory, well-seasoned, professional ceramists challenged Victor and Richard to enter more contests. This resulted in more wins, which opened new opportunities as Richard gained international recognition.

Victor discovered his talent for ceramics in 1981 when, as a teenager, he visited his parents’ hometown in Ayacucho. There, surrounded by artists, he naturally picked up the craft, experimenting with clay and taking advice from his aunts. It wasn’t until later that he learned his grandfather had been also a ceramist.

Back in Lima, he continued to develop his skill, but due to his young age exporters and buyers did not take him seriously. He struggled to sell his work and grew discouraged, leading him to decide to quit his craft. As a farewell impulse, he created a final 1.3 meter high sculpture, which caught the attention of a priest and opened new opportunities for him. Thanks to his talent, Victor was recruited to tutor in a church-funded workshop. For five years, he trained other ceramists while studying the bible. This helped him find a new passion for creating Nativities and devotional figures, saints, and virgins.

“I’ve always wanted a profession in the arts. I put in so much love into my ceramics that I feel I have reached my goal. I am very happy now.” 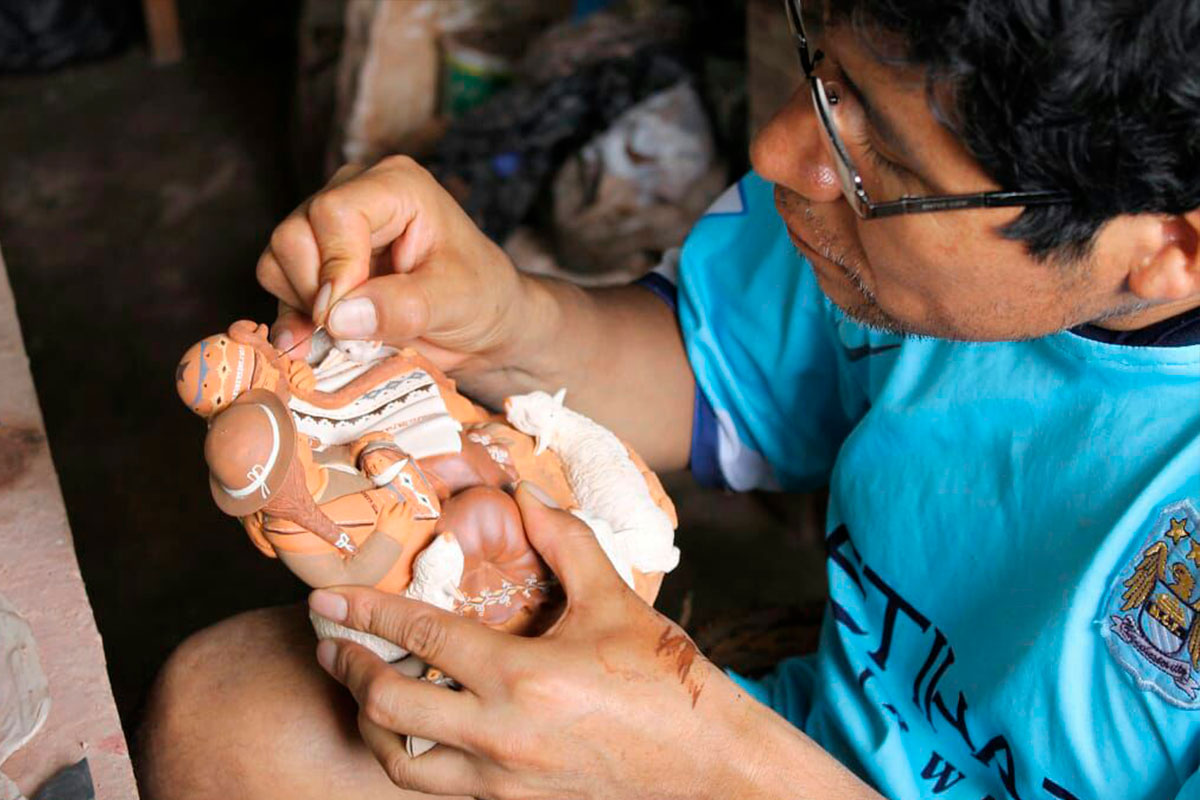 A few years later, Richard participated in a contest held in Rome and won first place again. During those earlier years in his career, Richard was offered invitations to travel nationally, including China and the U.S.A. He has traveled and exhibited a few times in the US. During those travels he enjoyed visiting different museums to absorb new ideas and inspiration for his craft. However, he enjoys using older techniques in his work. For example, to achieve the super fine and intricate details on his ceramics, he paints with the tip of a chicken feather; an ancient technique that is not commonly used any more. He often travels to Ayacucho, the land of his parents, to collect pigments for his naturally-colored clays.

Thanks to a financial aid project from Italy, Victor was able to open his own workshop. In 1995, he entered his first contest, along with his younger brother Richard, and won first place. From there, he went on to win four contests in a row, which gained him national and international recognition.

These days, Richard travels on occasion, but mostly enjoys spending his time in his workshop--and with his family. “In my free time, I enjoy grabbing my two packs of twenty-two-pound clay and lock myself away. I ask not to be disturbed, so I can let my imagination run wild and create something new and special.” He also enjoys watching his kids play with clay and make their own toys. 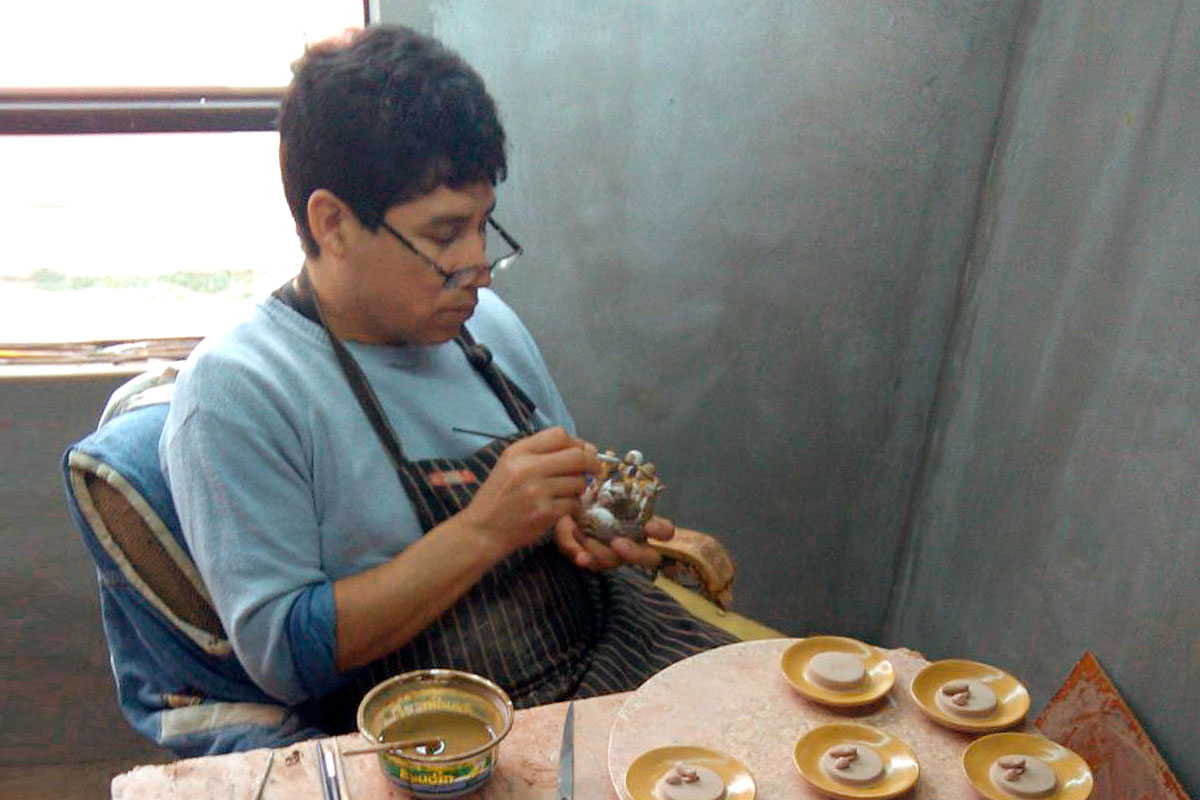 Richard has always had a passion to create. As a child, he dreamed of becoming a musician like his father; however, now, he feels naturally in control while working with clay! It’s as though it completes him.

Richard wishes one day there will be better recognition and support for the arts within Peru as he is disappointed that people know him better outside his own country. Internationally, he feels accomplished as an artist as he and his brother have been included as great masters of folk art of Latin America in the publications sponsored by the Center of Promotion of Culture, Banamex. He is proud as well to continue his grandfather’s tradition, who was a potter, and so he feels this art runs through his veins. 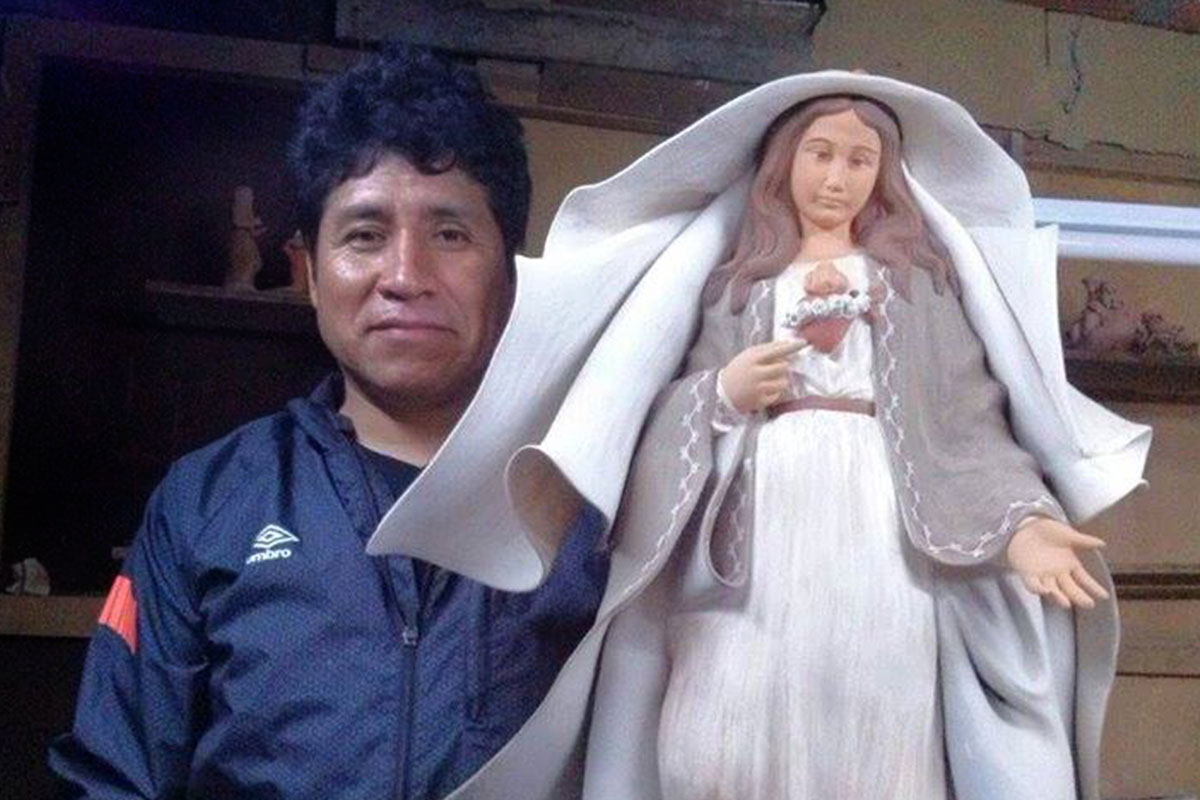 Today, he enjoys experimenting with new ideas and developing truly unique pieces. He feels fortunate to have a profession where he is able to not only earn a living, but also express himself and his values.

Richard learned the secrets of traditional ceramic making from his older brother in Ayucucho. When he was fifteen, his family moved to Lima where he continued to perfect his technique. Since 1995, Richard has been showcasing his art and gaining recognition by winning several folk art contests both nationally and internationally. In 2008, he won a first prize in a contest organized by the Vatican. His pieces are made in the traditional way using only natural clays for coloring. He enjoys creating original nativities and devotional pieces.

It is evident from his pieces that Victor always gives his best. As a perfectionist, he can spend up to two days perfecting a single face. He is also proud that his work honors the traditional techniques and continues to elevate the lineage of great ceramic artists from Ayacucho.